Fifty-one years after it was founded, the Wilder Speaking Prize competition has a new format that student winners and faculty agree sparks new life into the contest.

The annual oratory competition — which formerly relied on interested students deciding to participate and compete for the $250 prize awarded at graduation — was revamped this year to welcome more students in the process.

The English department included creating a speech as part of students' assigned work, which brought 51 students into the mix. Two or three semi-finalists from each form were chosen from that pool to move on to the final round and share their oral presentation: three-to-five minutes on this year's theme, integrity.

Learn about all the academic opportunities at Brooks School on our Embrace the Challenge page.

"By starting with the participation of all students through their English classes, we accomplished pulling in a larger base of participants from the start," said organizer and English teacher John Haile. "We also created a greater sense of engagement [school-wide]. Everyone could identify with the finalists to some extent."

And when the finals rolled around on February 26 in the Frank D. Ashburn Chapel following an all-school seated dinner, the 10 students competing were ready, as was the audience.

A record-breaking 250 people in the Brooks community weighed in via online survey with their pick for the winner – considering the criteria of appearance; preparation; presentation and delivery; clarity and effectiveness of thought; content and style of writing. "The robust response to the survey suggested that people cared enough about the competition this year to want their voices heard," said Haile.

"It was a very relaxed process for me; my English teacher gave us a few days to work out our speech, and then we spent some time discussing our views and presenting them to our classmates," said Smith. "I wasn't expecting to get past class."

In fact, Smith never expected to participate in the contest at all. "If this years Wilder Speaking Contest had been as it had been in the past, self selecting, with many other components to the competition, I can say for sure that I would not have pursued it, and I thank the teachers responsible for forcing this contest upon me," he said. "Thank you."

Chloe Little surprised herself in the process as well. "I enjoyed sharing my writing with others, as it was a new experience for me," she said. "It was a wonderful opportunity to grow and learn both in public speaking and writing because when I found out I had continued to the second round ... I was very surprised. Then, when I found out I moved on once again, I was shocked that something I created would be shared with the entire Brooks community. It was a great honor to finish as one of the top three in this contest with my peers of all grades around me supporting me."

Amanda Monahan, for her part, "enjoyed being able to speak in front of the school and share my view on integrity and make people laugh," she said. "I wanted to have fun with it ... and make it very light hearted."

That engaging attitude was certainly a winning formula. Haile said that out of all the aspects of the competition this year, it was the range of students' styles and material that most impressed him. "We had stories, traditional speeches, spoken-word poems," said the English teacher. "It was great, and I hope that grows next year." 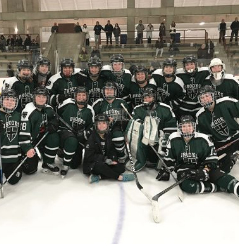 Tournament Time!
Girls 1st ice hockey and boys 1st basketball played their hearts out in two nail-biter NEPSAC tournament games at home that left one squad finished for the season and another headed for the semifinals.

Center for the Arts is "Game Changing" for Brooks
Tours of the new building's construction site cement alums' ideas that the space will transform the school in so many exciting ways.