Tjasa Owen got great reactions from friends when she shared that she'd agreed to do a stint this week as an artist-in-residence at Brooks School. "They were like, 'I can't believe you're there!' and 'You get to be there for a whole week?!'" said Owen. "I received lots of supportive notes."

That's because Brooks School used to be home to Owen '89. "It's very neat coming full circle," said the painter, who lived in Gardner and Hettinger West back in the day. ("Living in Hett West was huge," she recalled, "because it was just built so it was like staying at The Ritz."). "It's like walking down memory lane being back at Brooks. There's still the same feeling of community, the great teachers and everything. I feel like I just left a few days ago and came back – but with more wisdom." 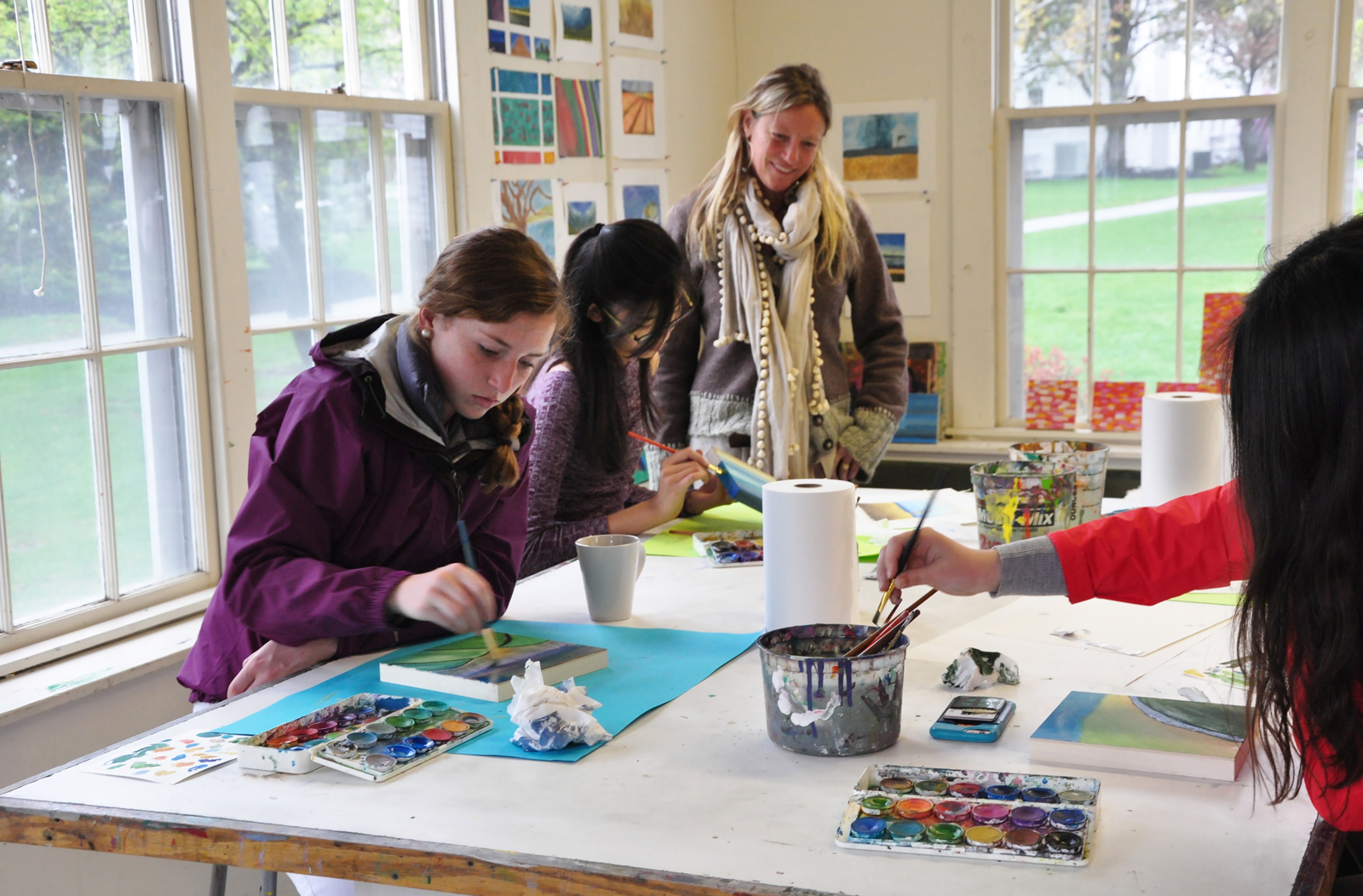 These days the landscape artist is typically found in one of her studios, in San Francisco or on Cape Cod. In each, Owen sketches, draws and paints her signature coastal scenes inspired by her travels and memories. An exhibit of her work, "Land & Sea," was recently installed in The Robert Lehman Art Center and will remain on display through May 20.
But working as a professional artist wasn't a given. "I loved art ... and I loved coming in and hanging out in this old room," Owen said, while sitting in the art studio at Brooks gazing around at the students absorbed in their watercolor painting. "I didn't think it would be a profession, though."
Yet after attending the University of Virginia to study art history, Owen continued to focus on art, studying at the National Academy of Art in New York, Coupa in Paris, and the Academy of Art in San Francisco, where she pursued interior architecture. Since 1998 she has been exhibiting her work nationwide.
"She's an amazingly creative artist — and a businessperson," said Director of the Robert Lehman Art Center Amy Graham P'19, P'20. "That's part of why I invited her to Brooks to work with the students. Speaking to someone from Brooks, who is now making a living as an artist, is poignant for them to hear. Tjasa knows what prep school is like, and so she can talk about the non-traditional ways of approaching life post-boarding school and college ... She follows her joy and still pays the bills."
Owen's goal in working with Brooks students is to simply share and to inspire. "I want to give them a glimpse of what it's like for someone who does this for a living," she said. "All through high school you're geared to, 'What is next?' so if a student has an artistic bent, it's nice to see someone professional doing what they love."
Art "doesn't have to be so formal," Owen added. "So I want to open students' eyes. Your work doesn't have to be a framed 'perfect' thing. My kind of art is for everyone. And I want to translate the process for them from getting their hands dirty in the studio to seeing the pieces all pristine in a gallery – like the Lehman. It shows them from beginning to end."
And that's exactly what the teens, who've been working this week with Owen in the studio, have heard and seen. Owen revealed the story of how she became an artist and shared some of the actual materials she uses for the artists-in-training to touch and try out: driftwood, cigar boxes, watercolor paper, sketchbooks, colored pencils, pastels, watercolor paints and acrylic paint.
Their mission has been to simply create landscapes (to connect to Owen's work and her show in the Lehman, using any colors and forms they wished) as well as to photograph a favorite painting of Owen's then paint a watercolor based on the image.
"It's been so fun seeing them get in the zone and create," said Owen. "And it's the wildest thing, seeing their interpretation of my work. What they've come up with is just beautiful — really inspiring."
The students have been likewise inspired by the experience. "She has such a cool style," said Maddie Shea '19 of Owen. "And just seeing someone who has been here before and gone on to an art career is great because it makes it seem so much more possible."
Kailey O'Neill '19 agreed. "It gives you hope," she said. Already, working with Owen in the studio has made an impact on the way she, for one, creates. "In a weird way working with watercolor has taught me to let go," said O'Neill. "And honestly, I think it's probably a pretty good metaphor for life."
See photos of Owen's visits to Brooks' art classes as well as her exhibit here.
Follow Brooks School on Facebook, Twitter and Instagram, to see a new photo, featuring the sports, classes, activities and happenings on campus, every day throughout the year.
For a list of additional upcoming exhibits at the Robert Lehman Art Center, click here.