From screenings at all-school meeting to movie screens nationwide!

Class of 2012 alum Max McGillivray's latest short film just may end up at a theater near you. His commercial for the Coca-Cola Regal Films Student Filmmaking Competition has been chosen to vie for the honor of airing before the previews of movies shown at Regal Films across the country.

McGillivray and his producing partner Ronald Brown — both M.F.A. students in the Screenwriting and Directing Program at Columbia University's School of the Arts — were one of 600 student filmmaking teams in the United States to enter the contest. The duo made the competition's top 15 and were then invited to speak with the program's leaders about their idea for their project, "The Premiere" (shown below).

"At that point, we started building story boards for our commercial and that sealed the deal," said McGillivray. "They loved it and chose us as one of the five groups [funded] to make a commercial. They gave us $15,000 and access to any Regal cinema that we wanted to film in."

The pair chose New York City's Times Square, and in November got to work on bringing their short film to life. "Our whole class agreed to come on board and help in the production phase, costuming, editing and sound design," said McGillivray. "We had a huge support system from Columbia [University]."

Help also came from Harvard University, from which the filmmaker earned his B.A. in 2016 and served as a teaching assistant in their department of Visual and Environmental Studies. "My set designer and art designer were both friends from my undergrad days at Harvard," he added.

But it was the community at Brooks that first gave him the foundation to pursue his dream of making movies. "I've loved film my whole life," said McGillivray, who claims to have been the North Andover Blockbuster's most frequent movie renter back in the day. "But I didn't begin making films until I got to Brooks."

Learn more about photography and filmmaking opportunities at Brooks School

He and Nelson Tracey '11 founded the Brooks Film Society as a film appreciation and production club of sorts, and began showing videos that they made at all-school meetings. "We'd watch films together and try our best to make them," said McGillivray. "Obviously we had no budget or idea of what to do, but it was amazing because there were no rules to it. We just ran around campus and did what we wanted. It was very creatively freeing. And the community was so supportive."

Take advantage of that support, he advises aspiring filmmakers at Brooks today. "When I was at Brooks [see him from that time in the 2011 Brooks video below] I was blindly pursuing this dream and wasn't filtering myself," said McGillivray. "I was really active in making as many things as possible. But when you get in an environment where you are one of many doing that, it's easy to shy away from your ideas or second guess yourself."

Enjoy the position you're in at Brooks "where everyone is supportive of you and in the same boat on this amazing campus and with faculty who really care about you," he continued. "You have so many opportunities to make things happen. Don't miss them!"

True to his word, McGillivray is maximizing his opportunities to this day and looking forward to someday directing. "I have to say I'm really into being on set and calling the shots," he said. "My mind runs a mile a minute on set and I feel really at home in that space. I love every portion of it: the nail-biting moments as well as those that make you bite your teeth. It's such an electric environment."

For the next two to three years he'll continue working on his M.F.A. "Ultimately, my studies will culminate into a thesis film that I'd hope goes to festivals and opens the door to feature filmmaking," he said.

Being chosen as one of the top three in the Coca-Cola Regal Films contest would be a good start. The top three will participate in CinemaCon in Las Vegas, where executives screen the competition films and choose a winner. "If our commercial wins," said McGillivray, "we're guaranteed it'll screen at every Regal worldwide before every movie!"

To help McGillivary win "Fan Favorite" in the contest, vote for his film by tweeting with #contestThePremiere daily through April 20.

La Dolce Vita
Students got a taste of the good life in Italy, with an 11-day trip to Tuscany during March break.

Under the Sea — in Grand Cayman
The Art & Science of SCUBA Diving Winter Term class is enjoying a week in the Caribbean to complete their training and become open-water certified. 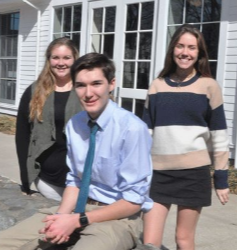 Wilder Speaking Prize Has New Format and Winners
The annual oratory competition got a revamp this year that brought more students into the fun.