NOV. 18 UPDATE: Brooks School's field hockey team, a.k.a. our newest ISL champions, won the NEPSAC tournament, too! After they overcame eighth-seeded Pomfret School 2-1 at home on Nov. 14 — in one ten-minute, sudden-victory overtime in the quarterfinal, Brooks' top-seed squad advanced in the tournament. They faced fourth-seeded St. Mark's School in the semifinals three days later (at home again) and scored victory again: 3-0. For the final, Brooks battled second-seed Rivers School on Nov. 18 at Choate Rosemary Hall. And we're thrilled to report that they won once again, 3-0 capturing the Class B title and a perfect 17-0-2 season!

The squad's 2-1 victory over Tabor Academy on Saturday cemented their season as undefeated. But the team had something to celebrate even before that. On November 7, their 5-0 win against Milton Academy secured the athletes the Independent School League (ISL) title — for the first time in 13 years! 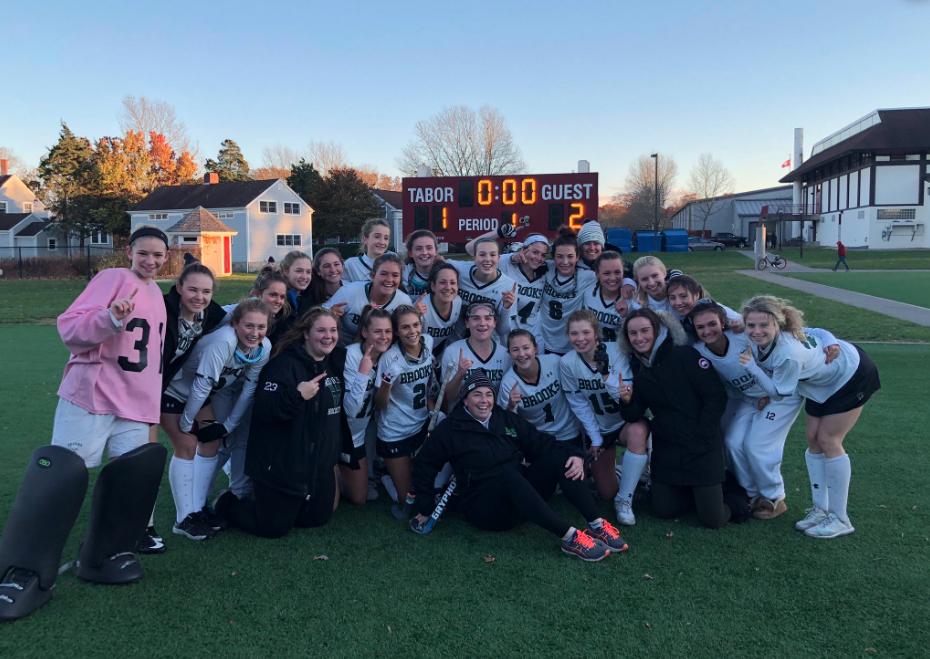 "It's surprising to many that we are doing as well as we are because we're just a group of athletes going out there to have fun every day," said Head Coach, and Mathematics Teacher Ali Mattison. The team "is excited about every game we win." An ISL title was never driving their ambition.

"We did really well last season, and then lost our last six games," she said. "The team knew our schedule gets harder and harder — we end with three Class A games... So they weren't thinking about winning the ISL." It wasn't until toward the end of their 14-0-2 season that the idea came into play.

What made this fall different? For one, Mattison said she took about seven more players onto the squad than she typically welcomes, "so that when our 12 sixth-formers graduate, we'll have athletes who have played together for at least a year."

Many have played other sports together already, including ice hockey and lacrosse. "They overlap in all three seasons," explained Mattison. "And because they're together all the time, they know each other really well."

With 47 teams on campus, there's a sport for everyone at Brooks.

Last year, the team had four sixth-formers, and a different game plan. "We relied on our sixth formers," she said. "Teammates gave them the ball and they looked up to them. But this year they're not relying on a single individual. They trust each other. It's not a one-person team this year."

Each of the players has "a common goal," she added. "They want to have fun. And when they're having fun, they do really well."

Already, Mattison is proud that "we've made field hockey look really pretty and really fun," she said. Take that November 7 matchup with Milton. "We scored two goals off Milton in the first five minutes on two penalty corners," she recalled.

Three more points followed, which shows, the coach insists, "the diversity of who can put the ball in the net. They just are willing to do what needs to be done for the success of the team."

Keeping goals out is also key. The squad finished the season with just six goals scored against them. (Goalie Emma Houlihan '21 has had 10 shutouts!)

Aside from a near broken finger and a hit to one athlete's face, the team hasn't been challenged with many injuries or sicknesses so far, either, for which Mattison is grateful.

"I just want to see us stay healthy so we can be at 100 percent because I know these athletes have so much potential, and I want to see them leave it out there," she said. "I just want them to be loving it for this week...Win or lose, the goal is to play with all of our hearts."

They'll certainly have crowd support, since Brooks will host the NEPSAC quarterfinal on Wednesday, when the team takes on eighth-seeded Pomfret School. (Boys 1st soccer is also playing in a game at home, versus Rivers School for the first-round of their Class B NEPSAC tournament).

The victor will face the winner of St. Mark's School's and Williston Northhampton School on Saturday in the semifinals. "The team knows they are going to be challenging games," said Mattison. "I don't think they take anything for granted."

Visit the field hockey team's page on brooksschool.org to learn more about the squad's goals and see the full season's schedule and scores.

New Volleyball Team is Getting The Jump on Competitors
As Brooks' players celebrate their wins, they also enjoy how special it is to be part of the first team of its kind in the school's history.

Celebrating the Center for the Arts!
Head of School John Packard kicked off the open house for students, faculty and staff to explore Brooks' new $28 million arts facility with a moving address.

Theater Troupe Hits the Road
Actors in the afternoon activities group are performing an original production at seven local spots off campus before bringing the final show home to Brooks for the first play in our new black-box theater.