Brooks Now Has Its Own Currency!

The future financiers finished creating a unique currency for the Brooks community this summer, printed a thousand "Brooks Bucks," and introduced these $5 bills on campus two weeks ago!

"It feels amazing to finally bring the currency into circulation," said Sarah Fleischman '19, who created the Bucks as one of the projects in the class with Martin Li '19 and recent graduates Aly Abou Eleinen '18, Stephen Chung '18 and Nate Smith '18.

During the course — that explored "the interests of those with money, the interests of those needing money, and the complex and interdependent system of private and public entities bridging the two" — students visited financial firms in Boston and New York and government agencies in Washington, D.C., including the Bureau of Engraving and Printing (in photo below).

There, they learned that it takes seven years to create a new design and print a new currency – and began planning their own. 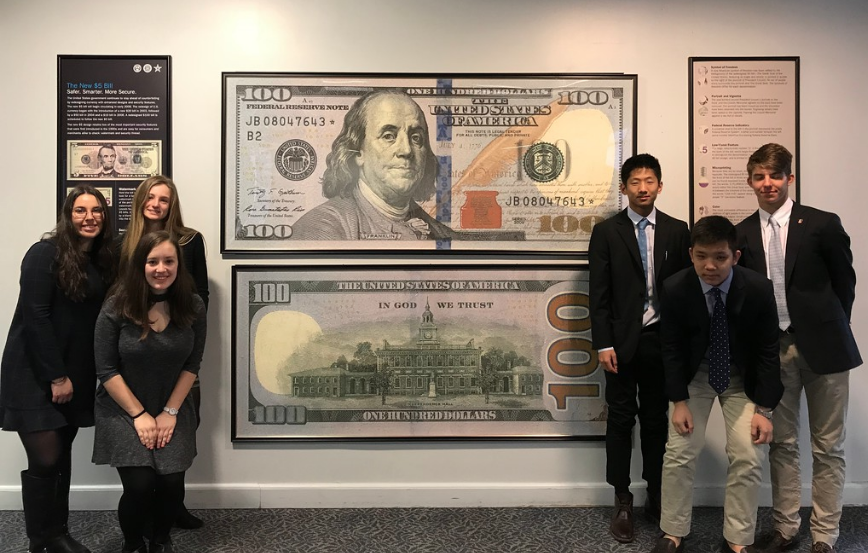 "How can Brooks have a currency?" asked mathematics teacher Tote Smith P'18, P'20, P'22 the class's leader. "Well, how can any place have one? The currency we use is only as good as the trust that we place in it; the value that we give it."

And when the five Wall Street students presented a prototype for their own currency during the course's capstone Winter Term Symposium, they gave it a value: a 1:1 ratio against the U.S. dollar, to be used at the school store and snack shop (with change given in U.S. currency).

This spring, the student body voted on a name. "Brooks Buck," was the faraway favorite of six options, said Smith. It took until summertime, however, for the design of the bill to be prepped and printed.

"I knew that I would be able to have a lasting visual impact on the Brooks community through this project, so my favorite part was working with our digital designer Nate Smith on the concepts for the design and finding the photos we needed from Brooks' archives," said Fleischman. (Smith had learned Photoshop in his digital photography class at Brooks and used his skills to do all of the manipulation of the imagery on the currency).


"Turns out, the economic part wasn't as exciting to the students as the artistic side of the project," said Smith. "I was really impressed with the way they just dove into it, getting into the archives and going around campus capturing images to create a library of art to use on the bill."

Look closely and there's a lot to see on each serial numbered bill, including a campus map in the background, a hidden owl and a stag in the woods. "There are also various secrets worked into the artistry of the bill, as security aspects, that only the creators know," he added.

Shortly after the start of the new school year, members of the faculty and staff put these beauties into action. They bought the bills from the school's business office and will give them out to students throughout the year as a reward for doing extra things on campus.

"It's a lot more exciting to use Brooks Bucks than a gift card," said Smith. Li agrees. The sixth-former joined this particular project because he said, "I wanted to create a better system for rewards at Brooks...The challenging part was trying to figure out if people would like our new currency and if the adults on campus would work together with us to make it happen."

He needn't have worried. In a recent all-school meeting, Head of School John Packard (above) announced that he is carrying Brooks Bucks around in his pocket ready to compensate any student whose name he doesn't know as part of his annual "Hello Campaign," at the beginning of the school year. Brooks' Investment Club will also use it as a reward in the mock stock market competition that they do each year.

"The fun thing is going to be to see how students use it," said Smith. "To find out that someone paid a classmate in Brooks Bucks to, say, string their lacrosse stick or something, would be great. We want it to actually be used as a medium of exchange on campus, but really it's a tool in students' hands and it will be years before we see the range of what will happen with it and the effect it has."

Fleischman, for one, hopes that the currency will "be an interesting part of Brooks that makes it unique and also serve as a daily reminder of a bit of school history," she said. "I believe that over time it will grow to be a part of the community."

Plans are already in place to grow the currency by denomination, at least. A $1 Brooks Buck is in the works, pending completion of the artwork, which will feature the new Center for the Arts and Brooks School founder Rev. Endicott Peabody. 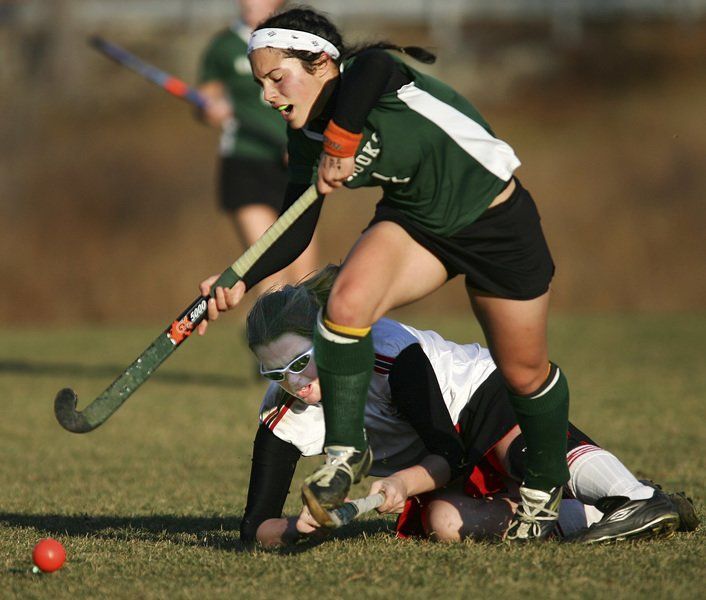 Meet our Athletics Hall of Famers
Before they're inducted on September 29, the honorees share with us what Brooks meant to them and their (wise) advice for current students!