Brooks' first musical in the Center for the Arts, "Hairspray," was a sight to behold last night. With impressive acting and singing, the performance was a perfect match to the new building and all the stunning sets, lighting and sound that the building has made possible.

To bring each to life, the technical crew programmed their system to move scenery and lighting on every line set that they have. "We had cues where four line sets are moving at the same time, making scenery pieces fly in and out," said Production Manager Deanna Stuart.

See an album of photos from the production at brooksschoolphotos.com.

With more than 50 members of the cast, people had to fly around behind the scenes too — in the costume shop, dressing rooms and green room.

A production of this size is challenging, acknowledged Director of Theater Robert Lazar. "It requires everyone and everything to be firing on all cylinders," he said. Thankfully "at this point in the process, that's exactly what's happening," he said. "We have a great group of people working on this show."

The cast let their talent shine on opening night, February 21, kicking off the three-show run before a full house, with 320 seats filled with classmates, faculty, family and friends.

"It went well!" said Lazar. "The students clearly and convincingly portrayed their characters in honest and truthful ways. In a show so large it would be easy to fall back and simply play a type or a caricature, but the cast didn't fall for that."

The technical crew performed beautifully too, he added: "They transitioned us from one environment to the next really well so as an audience we never were pulled out of the story that the cast was telling."

Read more about Brooks' theater program and how it provides opportunity for novice and experienced stage performers alike.

"The whole company was able to apply what that had learned over the rehearsal process in a way that they should all be so very proud of," Lazar declared.

It helps that they had a blast performing. Katie O'Brien '19 transformed into Tracy Turnblad (see below), an outcast teen hoping to dance on the hit "Corny Collins Show" who becomes a star and fights for integration of the all-white program. "I absolutely loved being a part of the first musical in the new Center for the Arts," she said. "'Hairspray' is one of my dream shows, and Tracy is a part I've always wanted to play."

The highlight for her, though, was the end of the evening. "I loved taking my bow," she explained. "It was a surreal feeling to have a full house with so many of my family and friends in the audience. I'm looking forward to another two fun nights!"

Costar Shea Baker '21 (see below), appreciated feeling that same support from the Brooks community. "Right before the show started, when I was standing backstage and could hear the people in the audience talking, that was my favorite part, because they all sounded so excited," she said. "That made me even more excited to perform!" 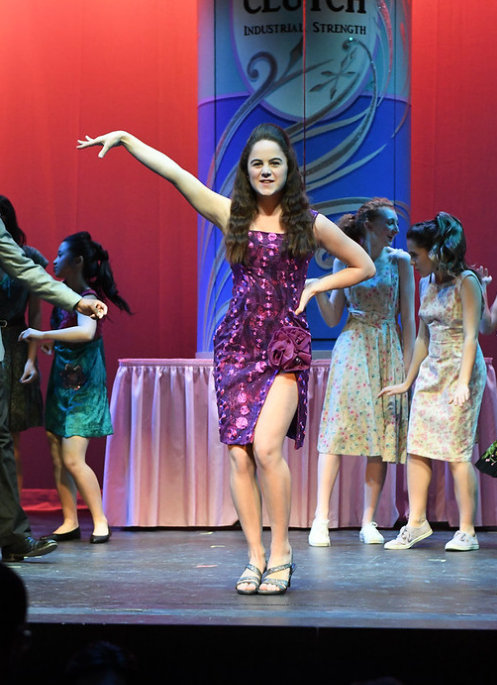 Acting in the first musical in Brooks' new building brought a bonus for Baker, too. "I come from a family that's always been really involved in Brooks theater," she said. "My aunt [Alynn Albert '96] performed in the musicals in the old theater when she attended Brooks, so last night I felt like I was carrying on her legacy. It felt really cool!"

"Action Packed" Model U.N. Was a Success
After months of preparation, 20 Brooks students took the United Nations (simulation) by storm!

Dusty's Last "Car Wars"
This Winter Term was the final time longtime teacher Dusty Richard headed the car repair class he dreamed up eight years ago. What's next for the course?