He thought he was prepared. Hongru Chen '22 had studied in his free time and game planned for weeks with Brooks School's Model U.N. for the Boston Invitational Model United Nations Conference. Then, during the event on February 8, he got a surprise middle-of-the-night wake-up call. . . .

"I was woken up at 12:30 in the morning for a 'midnight crisis,'" said Chen, who represented Lord Robin Arryn in the Game of Thrones crisis committee. Jumping into action he rallied — and ended up debating until 2 a.m. "The challenging and fast-paced dynamic of my committee kept my energy high," he recalled. That, and his passion and preparation, proved a winning combination: Chen won a "Verbal Commendation," for his role in the 19-annual conference. 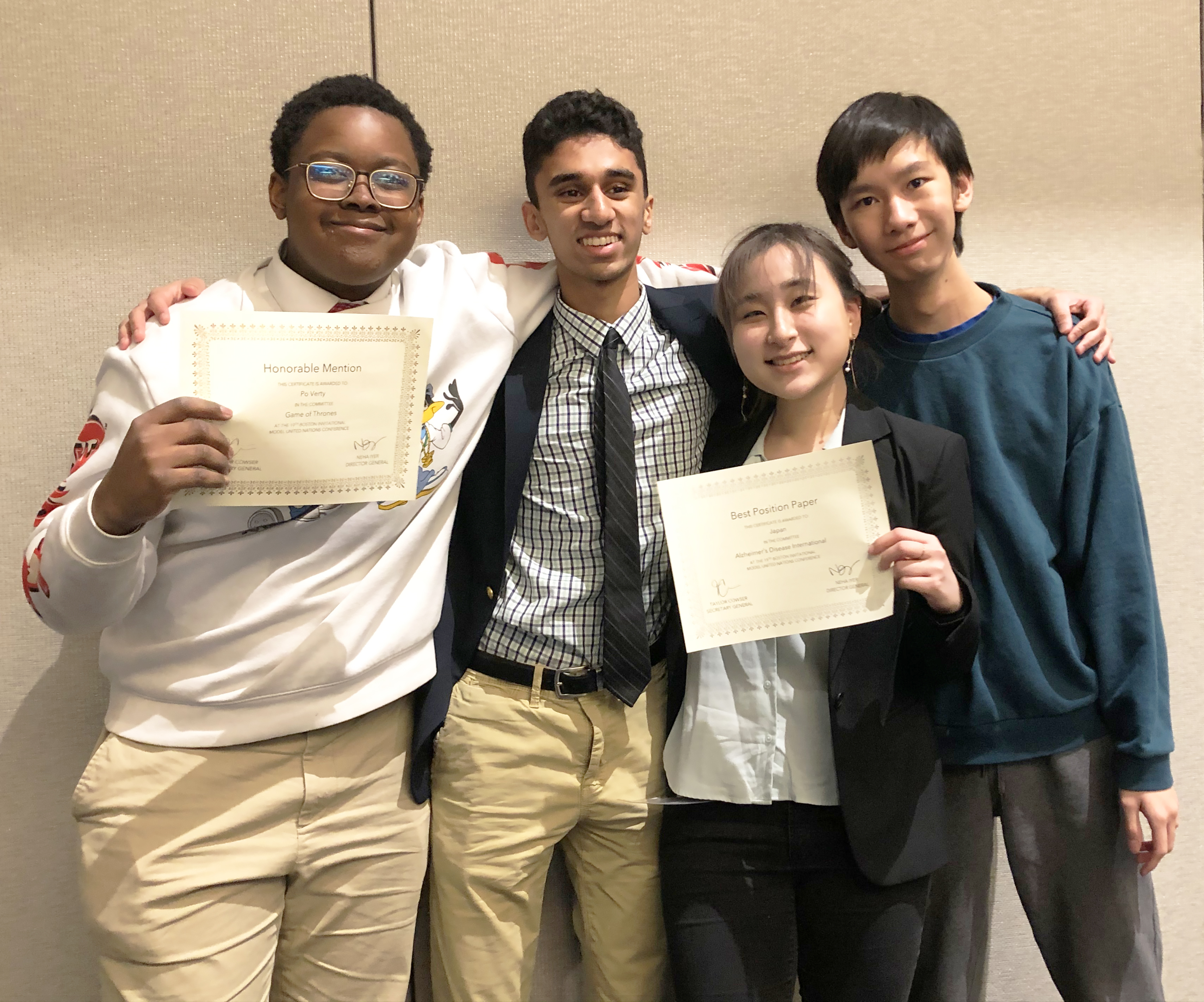 A total of five Brooks Students, in fact, were recognized at "BosMun," a three-day simulation of the United Nations for high school students at Boston Marriott-Copley hosted by Boston University February 7-9.

Team co-advisor Michele Musto, chair of the history department, revealed that it's the most awards in one conference during recent years. (To put it in perspective, Musto said, "We bring 20 students each year so five awards is a quarter of the team!"). Perhaps students' enthusiasm this year made all the difference.

Instead of intimidating them, the weekend of debate — over solutions to human rights for women, the Boston busing crisis and future of space exploration, to name just a few challenges — inspired and energized the Brooks team.

"I'm always impressed by the time and dedication students put into preparing for an event discussion world and historical events in their spare time," she said. "The majority of the preparation happens in winter term and this is a student-run club: Without their interest, their work and their time, this would not happen."

It's not just the awardees that made a strong impression, either. "I was particularly proud of our novices," she added. "Several were put into more advanced committees, which required a lot of work for a novice, and spoke in front of a room of more than 100 students in a general assembly committee, which can be quite intimidating. But our novices did it with strength and conviction. They all did an amazing job."

And had a great time doing it. "It was so fun engage in debate and go all in," Mebude shared afterward. "This is probably one of my greatest Brooks experiences."

Even though first-timer Emily Choe admitted "public speaking is terrifying for me" she said, "I loved it in the end." The sixth-former is interested in neuroscience so she said she welcomed the opportunity that the conference presented to write and talk Alzheimer's disease. "I had a lot of fun talking about Alzheimer's and policies to make support for dementia more accessible."

For returning Model U.N. team member Tanay Kommareddi, the challenge of being in a crisis committee was what fired him up. "It was hard to learn the in's and out's of the system but it ended up being the reason I had so much more fun this year than last year."

The whole team enjoyed BosMUN so much, Musto said that they are hoping to find another conference in participate in this spring.

Until then, check out our photo album from BosMUN — including images of the winners and the complete team in Boston at the event — at brooksschoolphotos.com.

Job Sharing
In a Winter Term course about career pathways, students met with professionals who offered an inside view of their occupations and inspiring stories about how they got there.

Speak for Yourself
In celebration of Martin Luther King, Jr. Day, social justice educator Jamila Lyiscott spoke to students and challenged them to consider their language — and its relationship to racism and power.

Running For His Life
Ultra-marathoner Dean Karnazes, who penned this year's All-Community Read, shares his thoughts about speaking at Brooks, where he'll take us behind the scenes of his bestselling book and inspiring adventures!