Even in the best of circumstances, competing against hundreds of students at the annual Boston Invitational Model United Nations Conference can be nerve wracking. Add in the delay of a day due to poor weather, and a year competing remotely during the pandemic, and the recent, three-day simulation of the United Nations might have been an anxious event.

Good thing the 19 students representing Brooks School at BosMUN's 21st session, hosted by Boston University February 4 – 6, found a friendly face at the competition. When the group arrived at The Boston Marriott-Copley hotel, where the debates took place, they discovered Nashr El Auliya '20 was filling in as a committee chair. 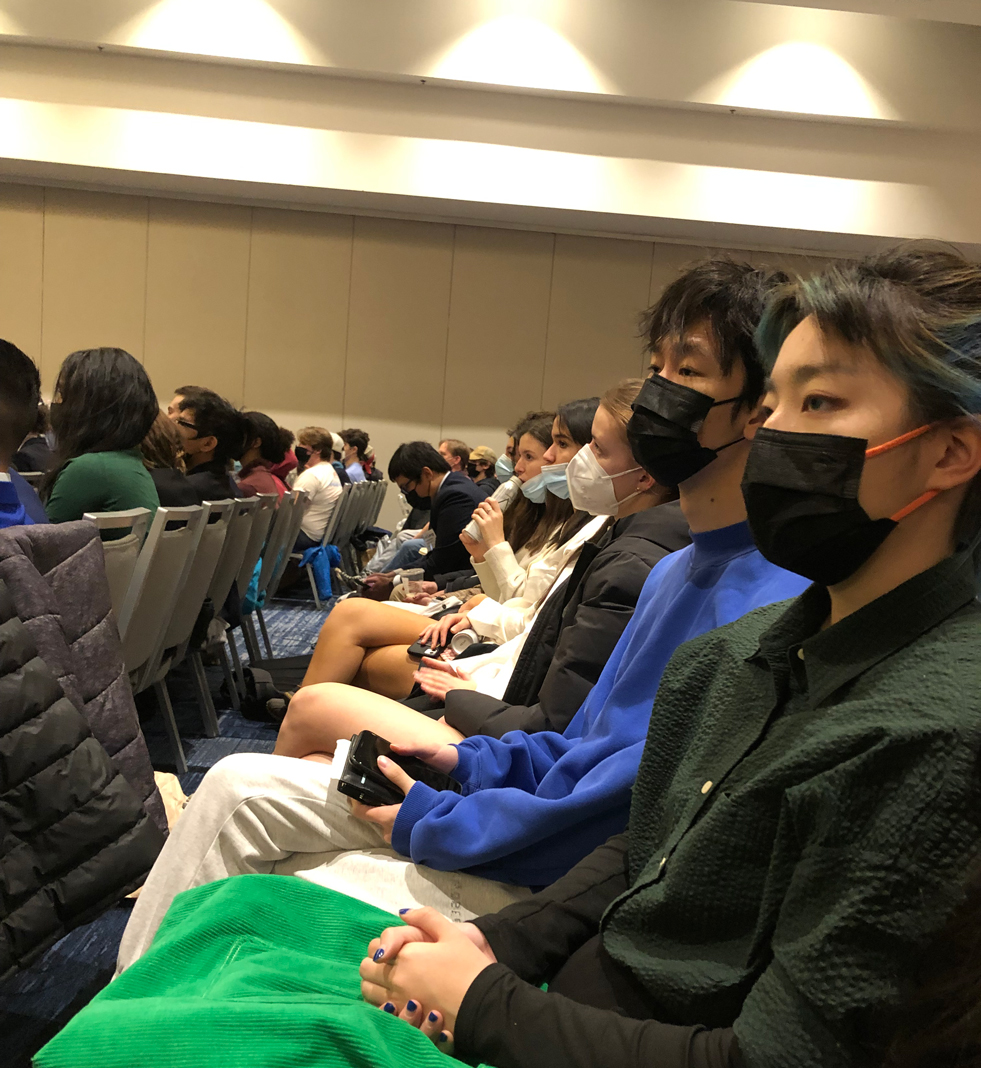 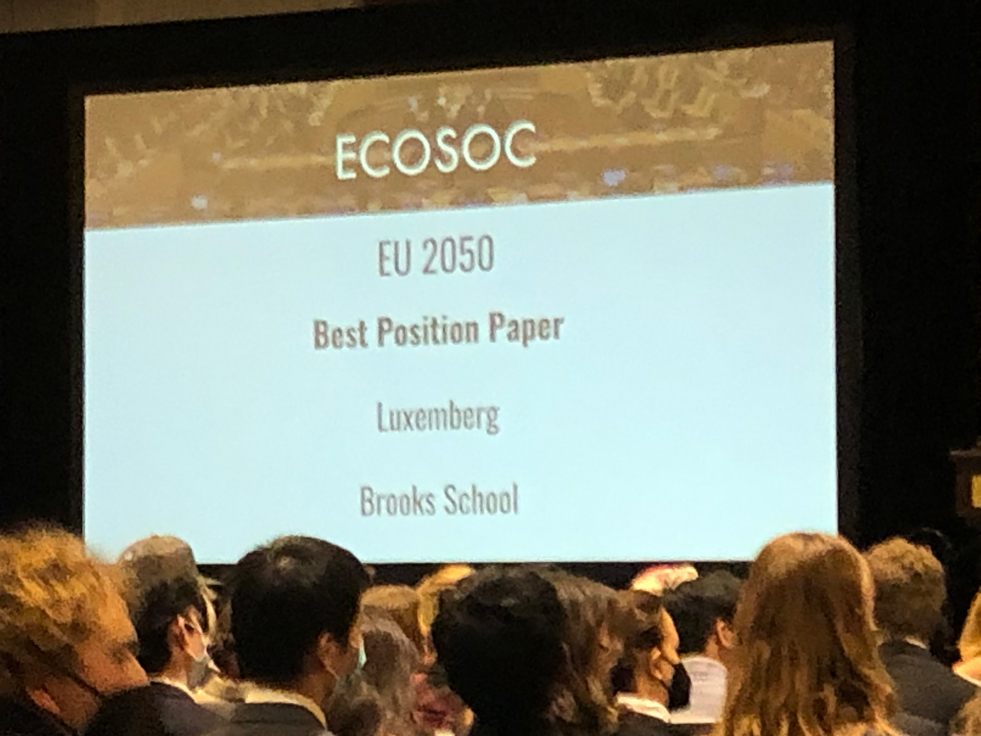 The alumnus must have been good luck. Five Brooks students won awards for their work during the weekend discussing international politics and historical topics ranging from the flu pandemic of 1918 and climate change refugees, to the "great grape boycott" and the Massachusetts Bay Transportation Authority: 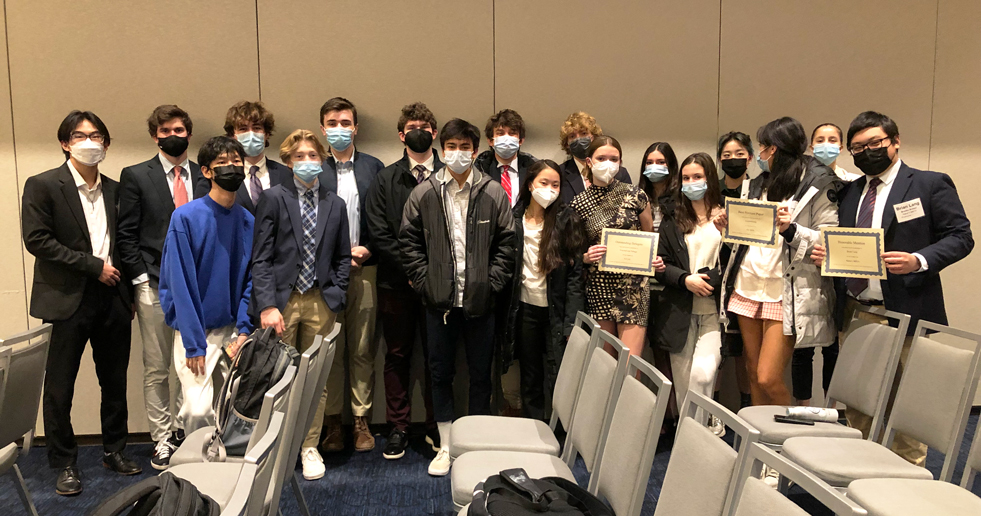 "The students put a lot of time in," reported Chair of the History Department and Model UN advisor Michele Musto of the group's preparation. "It was excellent work, by everyone!"

El Auliya, for his part, hadn't participated in Model UN at Brooks, though he had been an International Club student leader and shared his personal story in Chapel on United Nations Day. The Boston University mechanical engineering major, who hopes to minor in material sciences and engineering with a concentration in aerospace engineering, volunteered to fill in at BosMUN for an ill friend at the last-minute as part of a decision to "chase new experiences," he said.

But in fact, the conference led him to reminisce about the past, since the committee he chaired included a former dorm-mate, Hongru Chen '22.

"When Hongru stepped into my committee, to be honest, my impression of him was still that of the [fourth-former] that I left at Whitney, when my tenure as a prefect and time as a [sixth-former] ended back in 2020," said El Auliya. "Much to my joy, however, he blew me away and quite impressed me."

"Although I had to be impartial and objectively assess the delegation awards," he added, "my amazement came from the progress, the difference, the 'delta,' if you will, for all the STEM students out there. That was honestly the best part about seeing the people I used to work and study with — to see how much they've changed, to see how they've allowed Brooks to touch them." 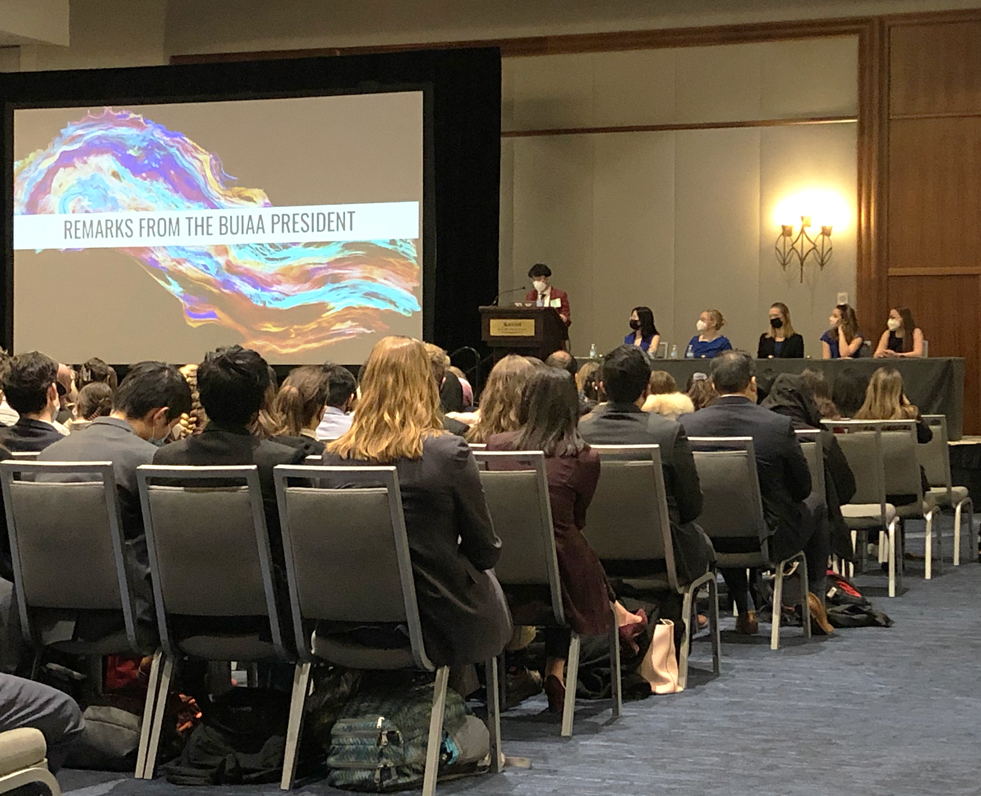 The group's diligent preparation certainly served them well — along with some social savvy.

"I think the most challenging part of MUN is actually not the public speaking, like most people think it is, but being able to accurately represent your country's needs and be the best delegate you can be," shared Tvisha Devireddy '23. "There are a lot of very driven people at these conferences, so learning to advocate for yourself, and an entire country, being assertive yet diplomatic, and knowing how to compromise, is all very important." 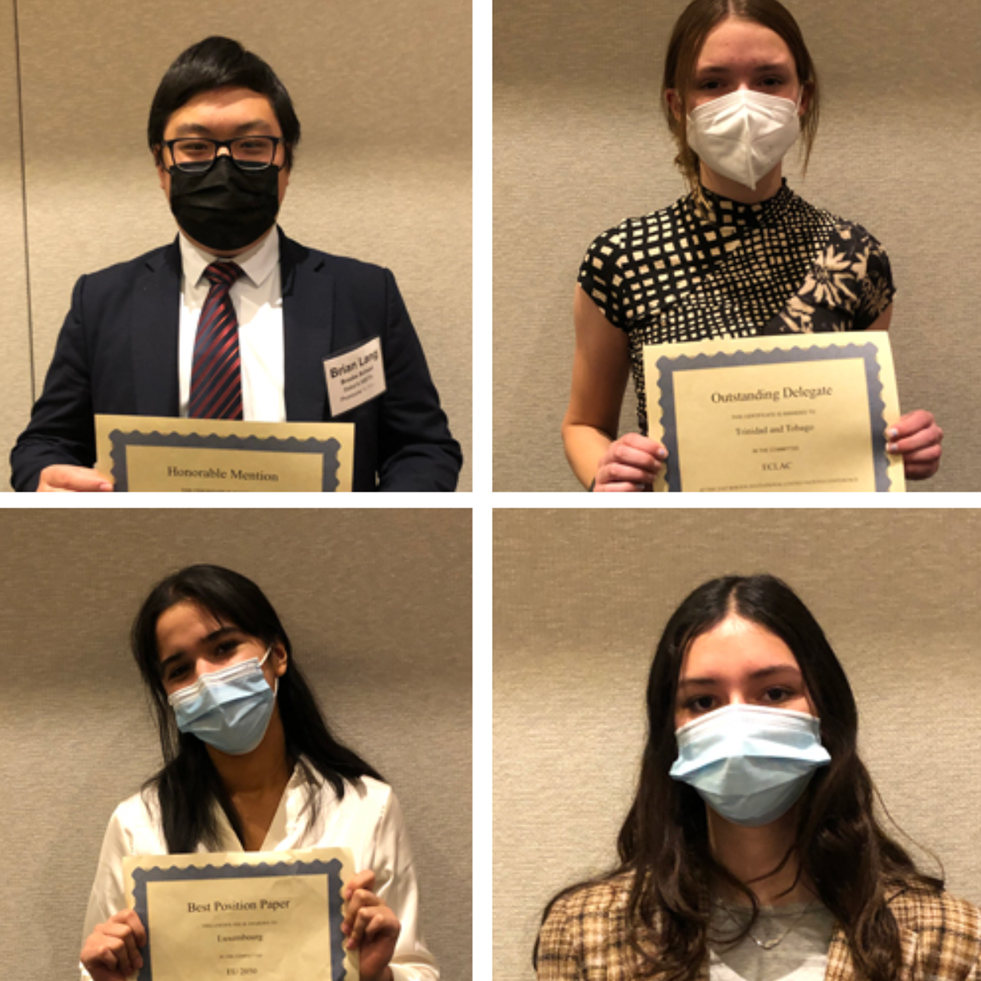 Not that the experience is all about studying and scheming. Celebration plays a part in the conference, as well.

Devireddy's weekend highlight came after passing her resolution on Saturday night. "It culminated a hard day's work of speeches, research and compromise with other delegates in my committee, and seeing the results of our work was incredibly gratifying," she said.

"It was also totally a bonding experience for my bloc," she added, noting, "that's when we began hanging out outside of committee."

Jerry Chen '23 had a similar experience and said he relished his time spent with all of the delegates from Brooks "meeting together and talking about their committees and fun things that happened that day. ... It's fun to hear about all the different committees and their different approaches to handling crisis situations and passing resolutions."

A lot of people "don't realize how fun MUN can actually be," said Devireddy. "There's a huge social component to these conferences, even inside committees. We do spend a lot of time debating details about the economy or politics in our countries, but I spent just as much time getting to know my fellow delegates. And I really enjoyed meeting new people with similar interests as me." (Perhaps especially those who also attended Brooks just a few years ago [pictured in center])! 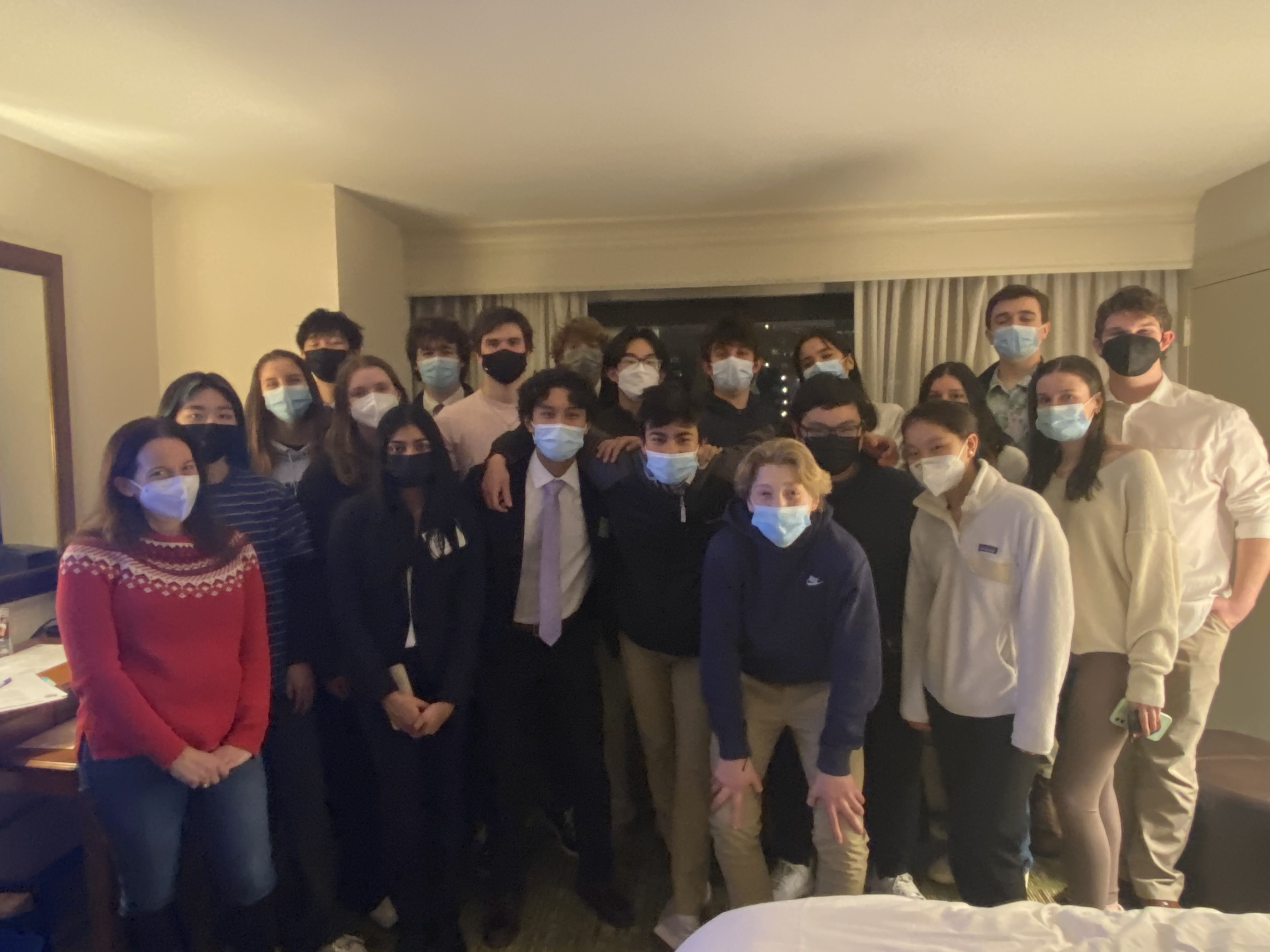 Networking 101
Alumni returned to campus to talk with students about professional skills and networking during an inspiring evening seminar.

Welcome!
In July, Nina Hanlon will join Brooks as assistant head of school. Learn all about her experience, expertise and why she's "so excited to be joining such a warm and welcoming community."

Winter Term Triumphs
All of the Brooks School campus community celebrated Winter Term during our annual Symposium on Friday. Watch video highlights to enjoy the event from wherever you are, too!