Established in 1926 in the town of North Andover, Brooks School provides a co-educational, college preparatory program for 380 students on a 270-acre campus overlooking Lake Cochichewick. Small classes allow students to work closely with teachers, fostering a relationship that is at the core of the warm, close-knit community. With a challenging academic curriculum that includes 20 advanced placement courses, Brooks also offers opportunities to study abroad in Africa, Europe and South America. The school’s exceptional athletic program has earned numerous league and New England championships.

Brooks School was founded by the Rev. Endicott Peabody, headmaster of Groton School. Associated with him were Richard Russell, who gave the land and original buildings and who served for many years as secretary-treasurer of the board of trustees; the Reverend Sherrard Billings, senior master at Groton; James Jackson, a Groton graduate and trustee; Roger B. Merriman, also a Groton trustee and parent; and the Right Reverend Charles L. Slattery, a former Groton teacher and trustee. Mr. Peabody believed that there was a need for another small boarding school built on the Groton model. The school was to be named after Phillips Brooks, the rector of Boston's Trinity Church, and the teaching was to be that of the Episcopal faith.

Frank D. Ashburn, a graduate of Groton and Yale, was appointed the school's first headmaster. Brooks School opened September 29, 1927, with 14 boys in the first and second forms and two masters, a headmaster and a headmistress. Thereafter, one form was added each year until the school included all six forms. The first class graduated in 1932. 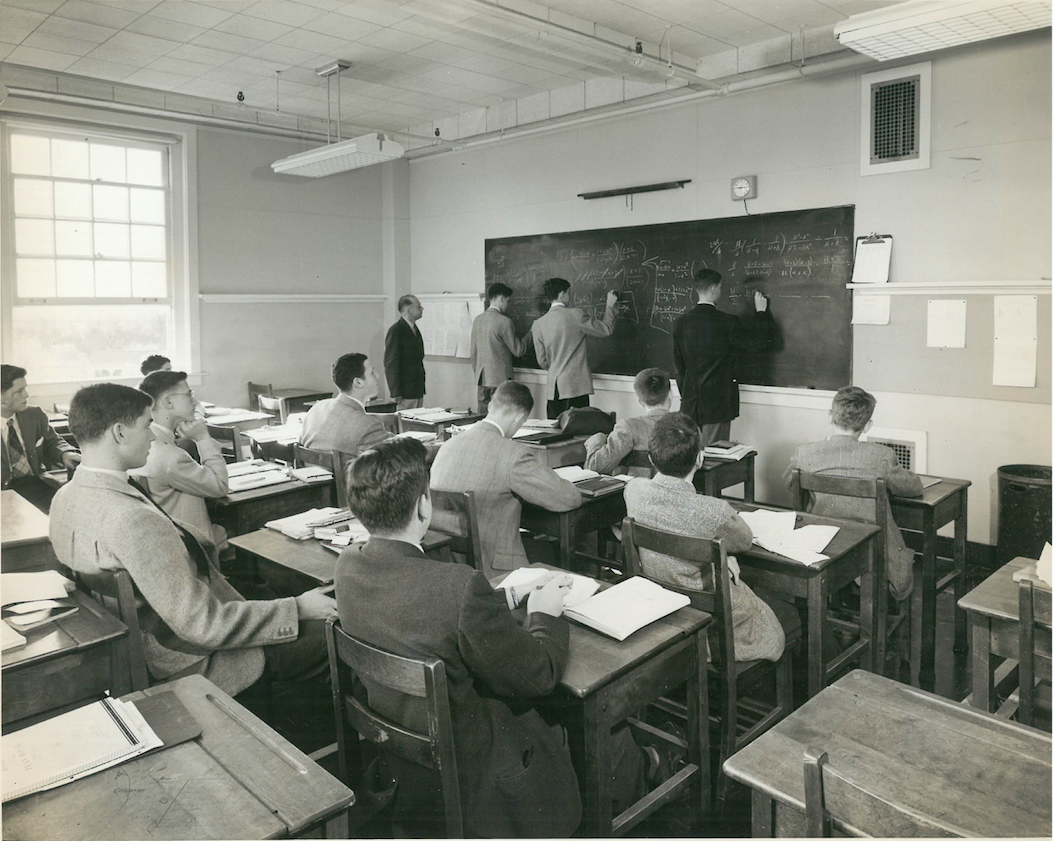 Father of all below, above,
Whose name is light, whose name is love,
Here be thy truth and goodness known,
And make these fields and halls thine own.

Thy temple gates stand open wide;
O Christ, we enter at thy side,
With thee to consecrate our pow'rs,
And make our Father's business ours.

For days of drought which yet shall be,
On untrod land, on unsail'd sea,
We kneel and fill our cup of youth,
At these fair fountains of thy truth.

O world, all bright and brave and young,
With deeds unwrought and songs unsung,
For all the strength thy tasks will give
We greet thee, we, about to live.

Father, thy children bless the care
Which sheds thy sunlight ev'rywhere,
Shine on our school and let us be
Teachers and scholars taught by thee.

In 1931 the desire for a school shield first manifested itself, and Mr. Ashburn invited both amateurs and professionals to submit designs for one. These ranged from elaborate symbols of brooks and bridges to ones so stark as to be described by The Bishop as “spots of ink.” By February 1932 the motto had been proposed and accepted by C. Lyman ’32 and later that year the official Brooks shield, which had been suggested by faculty member Russell S. Morse, appeared on the cover of The Bishop for the first time.

The design of the shield consists of a black cross superimposed on a white cross and centered on a field of green. The bearing is one of great antiquity, and the motto with its play on words also has an ancient lineage. “Victuri te salutamus” is a Latin translation of the line in the School Hymn, “We greet thee, we, about to live;” but since “victuri” can also be rendered “about to conquer,” the motto takes on a double meaning. On the official seal of the school the motto is omitted and the shield is set on a background of four quatrefoils suggestive of ecclesiastic decoration and ringed with the words, “Sigillum Scholiae Brooksianae Andov. Septent. in Repub. Mass.”

The Measure of Greatness

A sermon preached by the Rev. Bob Flanagan, School Minister, at the Frank D. Ashburn Chapel, North Andover, Massachusetts, on the 16th Sunday of School, Year A, Luke 9:46-48, February 4, 2009.

How do you measure greatness?

And why was Phillips great? Simply he moved the hearts of men and women across the globe. His words spoke to the souls of millions in a way that drew people out of the despair of the mundane to higher vistas where they could see the land of goodness that they longed for. Phillips stirred souls. He quickened heart beats. He inspired thoughts of possibility.

Physically: Phillips stood at 6’4”, weighed over 300 pounds and spoke from the pulpit at Trinity Church, Boston at a mesmerizing 200 words a minute. His sermons were like a freight train rolling downhill or a freighter plowing downriver with an ebbing tide. He was completely captivating and utterly spellbinding.

However, he was not always this way. Phillips went to Harvard College when he was 16. Yes, I said 16. He was very bright. When he graduated from Harvard, at 19-years-old, he was delighted to be hired at his former school, the Latin School in Boston. At the time he wanted to become a college professor. So to gain some experience he figured he would teach high school for a time. He thought teaching high school Latin and Greek was a good, safe choice. Well, things didn’t go so well for Phillips. As a high school teacher, he was a complete failure.

After teaching some younger boys, he was assigned to teach upperclassmen. He was given a class of unruly boys and he was overconfident in his students’ desire to learn. They took complete advantage of him. The boys locked him in his classroom. They scatter explosive matches on the floor and even threw buckshot in his face. It was a class of chaos. Phillips became depressed and shortly later resigned. The headmaster of Latin School said to Phillips, within earshot of other faculty, that “he never knew a man who failed in teaching to succeed in anything else” (Woolverton, p. 51-53).

For a many months, Phillips did nothing. He spiraled into a funk. He was depressed and longed for his youth where all things were still possible. Finally, at the recommendation of his mentor at Harvard, he enrolled at the Protestant Episcopal Seminary of Virginia or as it is known in the south, “The Seminary.” It is also the seminary that I graduated from.

If you were to measure Phillips greatness at this moment in his life, you might simply laugh. I wonder if any of his seminary classmates ever thought he’d amount to much as a preacher. But Phillips didn’t give up. In fact, for the rest of his life, he took weekly voice lessons to improve his locution. And when he eulogized Abraham Lincoln in Philadelphia, just days after the president’s assassination, finally Phillips gained notoriety. His greatness began to grow. From there his greatness shot up and rose. Thousands of people packed into Trinity Church in Copley Square to hear him speak. And at his funeral some 15,000 people came to mourn the loss of this great man.

Some of you may feel like young Phillips. Maybe you have faced some setback recently. Maybe your life hasn’t gone just the way you’ve wanted. Look to Phillips as a model for your life. As I have illustrated to you, Phillips had several major failures in his life, but each time he sprang back. He reflected on what had happened. He sought advice from others and then found a solution. He didn’t give up, nor should you.

Maybe you’re unsure how to be better, how to become great. Look to Phillips as a mentor for your life. There are many books written about Phillips’ life and his writings. Many of these books are in our library down the hill. If you pull theses books off the shelf, you will discover many important insights and life-wisdom.

Maybe like Phillips you feel down and hard-pressed. Maybe you feel frustrated and in a funk. Look to Phillips as a mirror for your life. Are you wading in waters of woe? If so, hold up the life of Phillips to your own. Look hard at the failures in your own life. Do they compare to Phillips? If not, then what are you complaining about. Get out of that dark cold water onto dry land and get going and get positive.

Maybe you’re looking for a spark, a reason to push yourself to higher success. Look to Phillips as a motivator for your life. Phillips took his skills, his ability to communicate through written words and excelled. What are your skills? Take hold of your life and strive to do more and be even better.

For those of you who are faith focused and inspired, whose enthusiasm comes from God. Phillips writes these words: “To a young [person] just bursting through the open doors of life, radiant with health, eager for work with an infinite sense of vitality [give your life to God who is] “the Strengthener…the Setter of great tasks; the God who holds the crown of victory on the tops of high mountains up which…eager-hearted young heroes may climb to win it; the God who asks great sacrifices and who gives glorious rewards.”

Greatness is in each and every one of you. The measure of your greatness knows only the boundaries that you timidly build. You are held back only by the tiny fences that occupy the negative recesses of your mind. You stand at the threshold of potential with unbridled opportunity ready to carry you up great heights. So follow trail of giant footprints left by Phillips Brooks. With his help, with his overflowing enthusiasm, you too may one day be measured by statues of bronze, schools named after you, and books written describing your great achievements.

On October 30, 2018, Head of School John Packard welcomed the Brooks community into the school's new Center for the Arts. (Construction began in the spring of 2017, after Packard broke ground during Alumni Weekend).

The $28 million facility bonds together the visual, musical, and performing arts in the center of campus. Learn more about the impressive building and the ways that it elevates the arts in our curriculum on the Center for the Arts page.

See photos of the transformation at brooksschoolphotos.com.

The Brooks School Archives, which serve as the repository for the official records of Brooks School, are housed in the lower level of the Henry Luce III Library. Archival materials are irreplaceable and are collected, preserved and organized so that they can be accessed and conserved for future generations. The Archives contain:

Since archival materials have historical, legal, evidential and administrative value to the institution they may be used only under the supervision of the Archivist.

Prospective families, please join us online to learn more about Brooks and the admission process, as well as ask any questions you have!